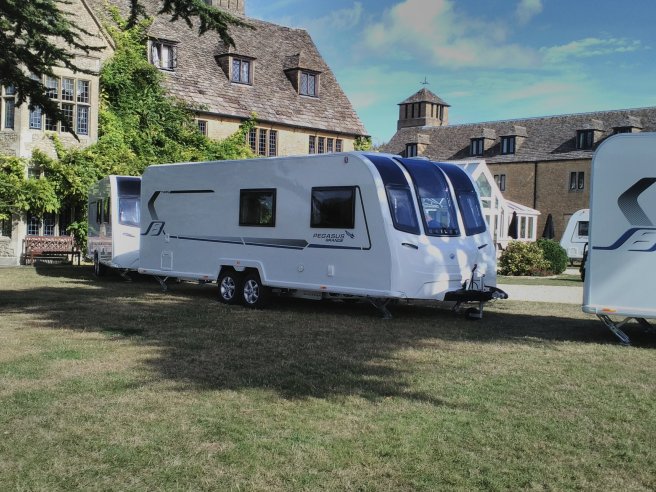 Once the maximum width that could be sold in the UK was 7’6″ (2.29 meters), then a few years ago the limit was increased to 8’4″ (2.55 meters). Recently manufacturers have been launching new wider models at around 8’0″ either in an entry level range or as a luxury model. Bailey have done something different and have decided to go for the middle ground.

Bailey of course are no stranger to a building a wide body. The short lived Retreat ‘Leisure Home’ from 2012 was 8’2″ wide, however it was too long to be towed by an ordinary car and designed to be permanently sited. Whilst not a big seller the two Retreat models did prove that Bailey’s Alu-Tech bodyshell could be used to build a larger caravans. 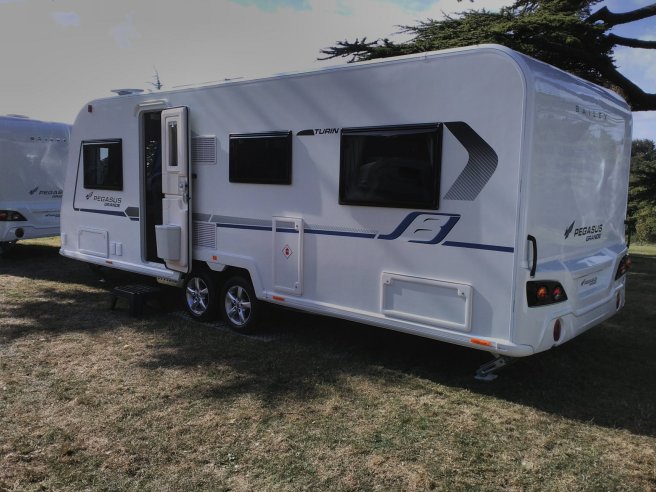 Fast forward a few years and Bailey relaunch the Pegasus range, this time all at 8’0″ wide and with the Grande name added. The six models (two single axle and four twin axles) carry a mix of familiar and new names. One name to return is the twin axle Turin, a model not seen another the 65th anniversary Pegasus GT65 range.

The new Turin has essentially the same layout as the previous Turin with front single beds, side dinette and rear French bed. The extra with this time allows for a wider side dinette with a wall mounted side table. 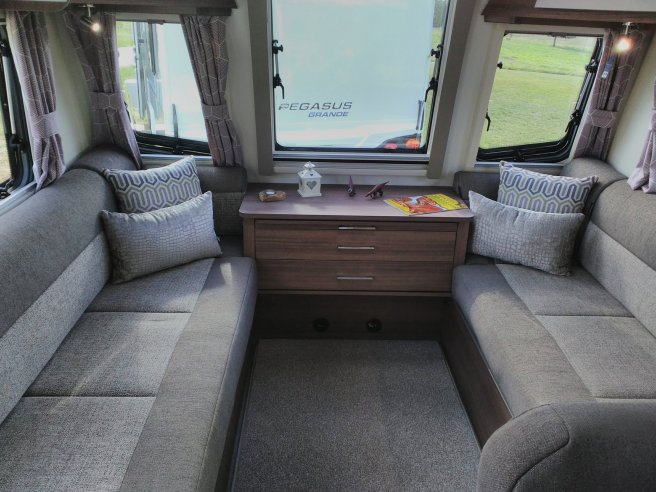 The styling, both internal and external, share the same design DNA that is used in both the Phoenix and Unicorn ranges. This gives all Bailey ranges a uniform and family look and all models have the vertical front skylight.

The front lounge takes full advantage of the extra width with a wide chest of drawers with a pull out table. The Turin (and Palermo) doesn’t feature the ‘G’ shaped lounge as in other Pegasus Grande models, however it is a spacious traditional lounge. 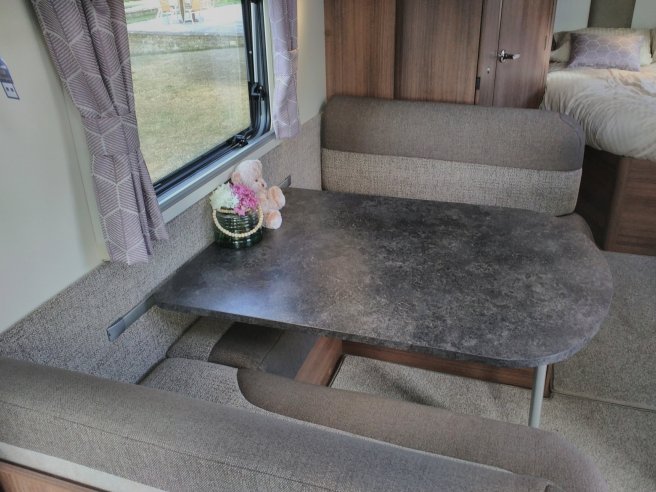 The side dinette as previously mentioned is wider than in the previous GT65 Turin. This time the dinette makes into a 3’8″ x 6’6″ double bed. The hook on table also gives lots of space for playtime or for dinner.

Opposite the dinette is the kitchen. At first glance an unconventional arrangement with the Dometic 145 litre tower fridge with microwave oven above in an more central position, however it works quite well. This layout allows for a handy cupboard by the door. 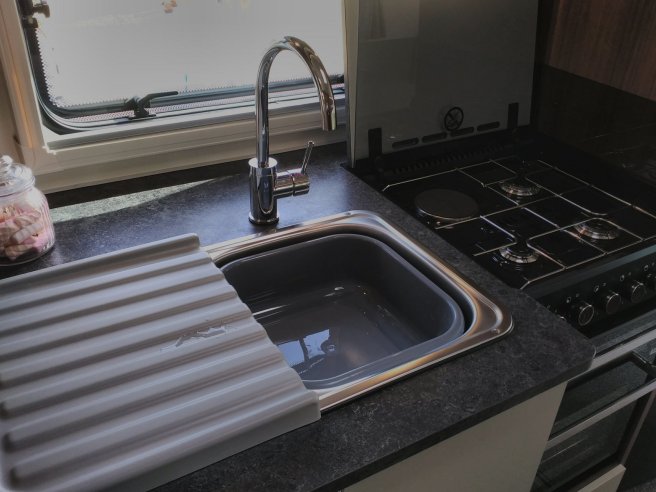 The kitchen again follows Bailey styling. A solid worktop over the 3 burner plus hotplate Theford hob oven and grill. The square sink has a removable draining board and comes complete with a washing up bowl. The kitchen has an extended look as the kitchen also houses the externally accessed gas locker. 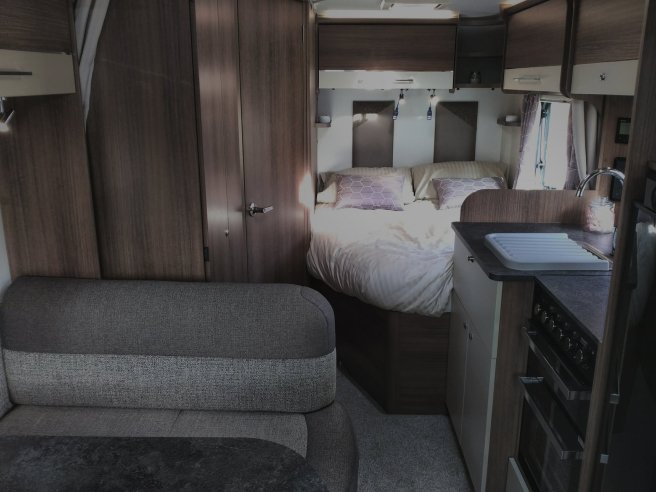 One reason for choosing the Turin is the fixed French bed. The 4’6″ x 6’1″ bed lives in the far corner so during the day it is far enough away from the lounge as you don’t feel that you are living in a bedroom. 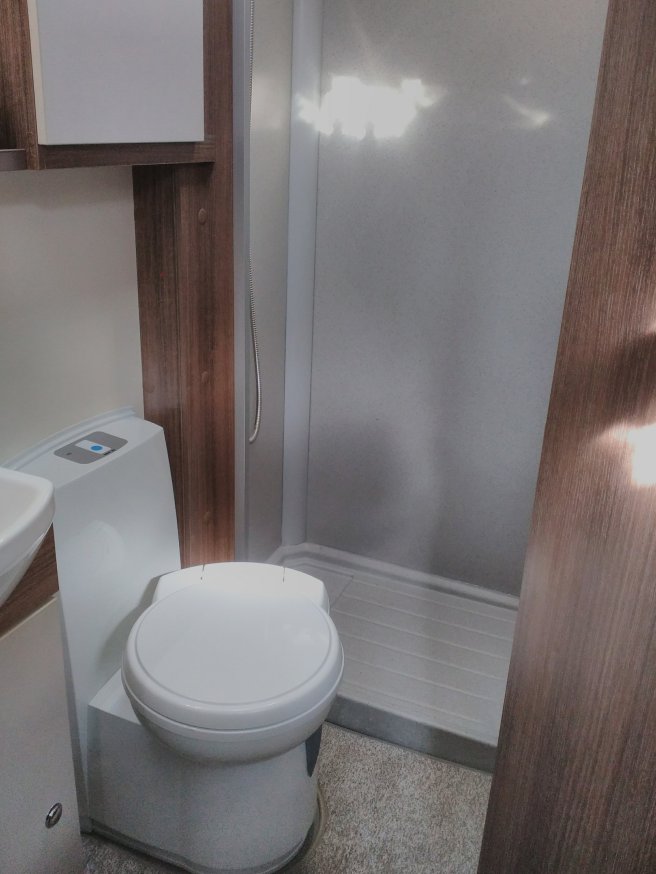 Next to the bed is the washroom with everything thing you would expect with separate shower. Anyone familiar with the Unicorn Seville would recognise a lot of design similarities.

The standard upholstery is called ‘Kempton’. 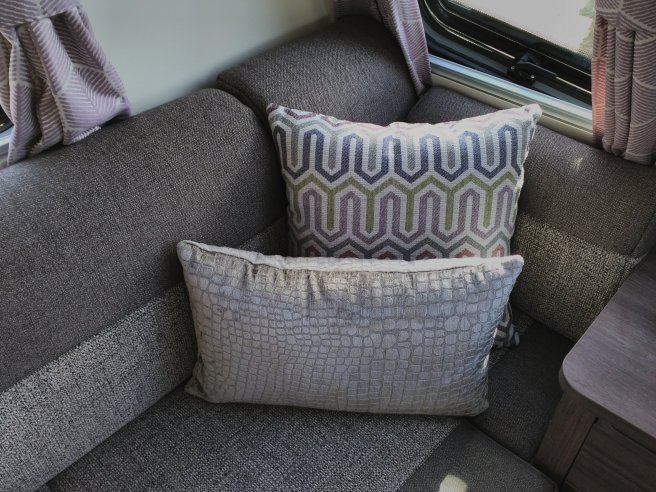 The optional upholstery is called ‘Archway’ and this choice was fitted to the model reviwed. Bespoke bedding sets to co-ordinate with the soft furnishings are available as an optional extra.

Overall the Bailey Pegasus Grande is an interesting caravan. It feels very much like a Bailey, the layout has some twists on the similar layouts used in the Elddis Avante 840, Sprite Super Quattro and Lunar Quasar 686. There is a good ‘three room’ feel and the side dinette feels more practical than the U shaped dinette used by Elddis and Swift.

If you are in the market for a caravan with lots of internal space to use as a large family tourer or as a permanently sited caravan, the Bailey Pegasus Grande Turin is worth a look.

Details as supplied by Bailey of Bristol